This is a custom made PCB for the Urban Kitchen Garden.

This project is designed to allow anyone, anywhere to have a modular, aesthetically pleasing, and simple device to grow food in their own kitchen.

Having long enjoyed growing my own food I searched for a commercial unit to allow me to grow vegetables , herbs and micro-greens/sprouts year round. I found commercial products to significantly lack the control and enclosed-nature I desired to grow what I want, when I want without buying their proprietary seeds/pods/modules.

It uses a peltier driven wine cooler into a grow chamber and powered it with a simple Arduino for control. The LCD displays the relevant parameters (or alarms) at a glance.

The unit can control the temp, monitor humidity and soil moisture for any plants. A simple LED spotlight provides sufficient light.

Hopefully this open-source build will inspire others to grow their own food at home. Perhaps this will allow anyone to achieve some self-reliance for a brighter future regardless of where they may be.

This section can be used to explain everything about your project.

I have always wanted to grow my own food indoors but our Canadian winters make it difficult. I tried a couple basic DIY methods and then graduated to the AeroGarden commercial counter-top unit. They have proprietary CF (compact fluorescent) lighting, no climate control as they are only open air and rely on you buying their proprietary “seed pods”. The results were less than I expected…

I decided there must be a better way and in the fall of 2014 I began creating my own counter-top garden. I simply took the perfectly enclosed (and insulated) wine cooler and controlled it via a basic Arduino. 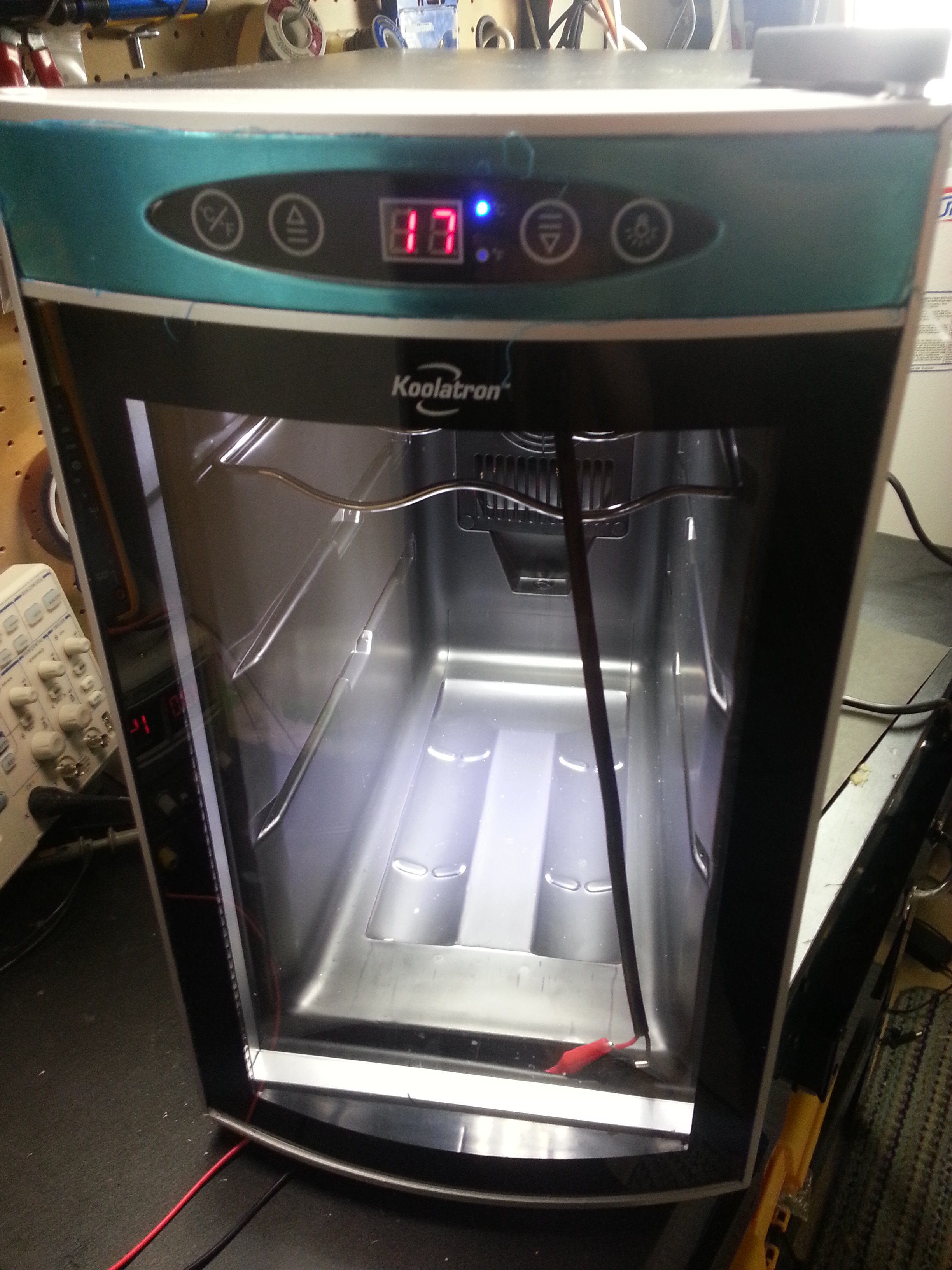 This unit allows for any grow media to be used, all parameters such as temp, lighting etc are controllable. No fancy chemicals/fertilizers are required. Just Some counter space in your kitchen or any other room in your home. 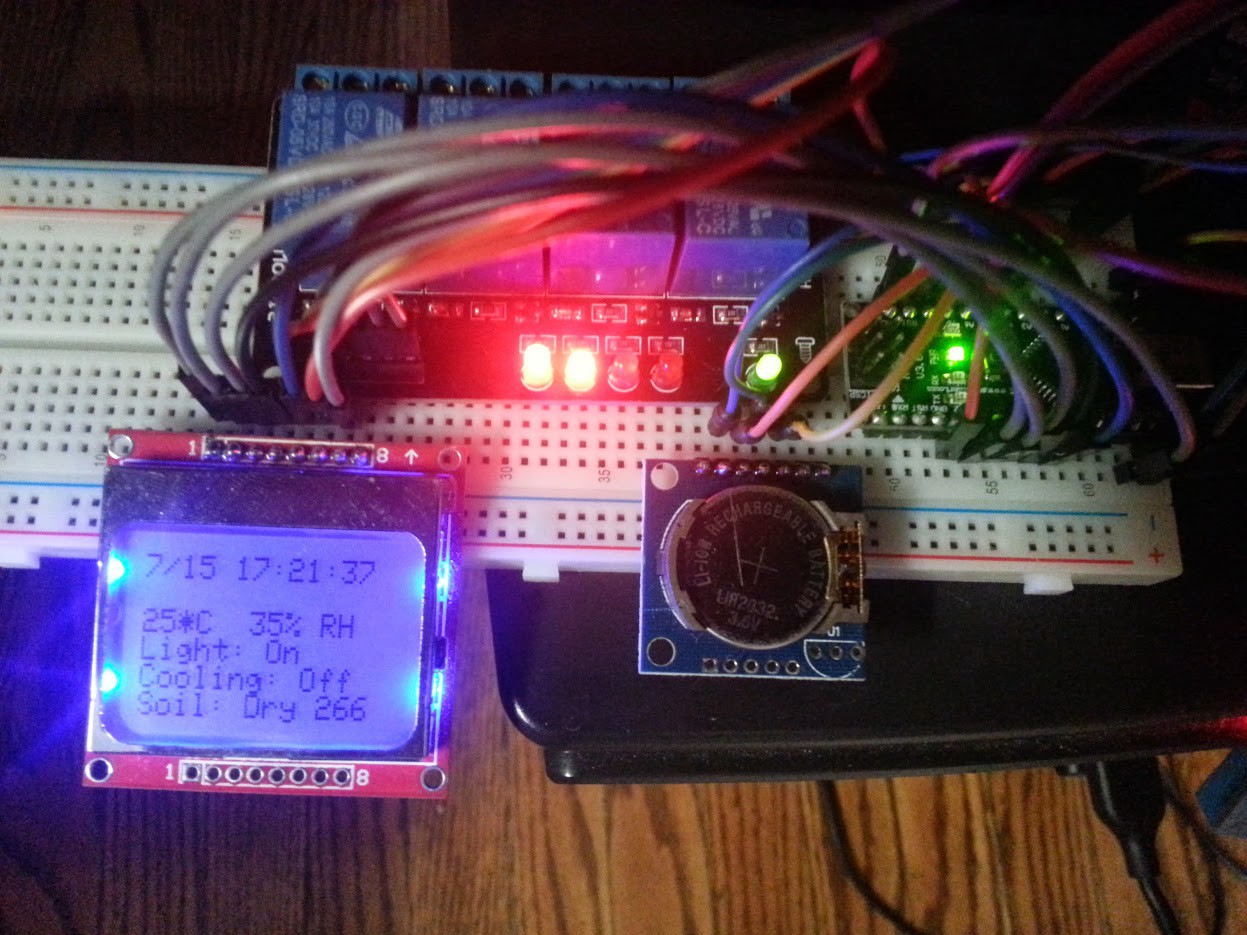 The commercial units I have used in the past require you to place them in an unused room as the light spillage is INSANELY bright. With this enclosure and the tinted glass door- most of the light remains contained within the unit- less waste and no annoyance. This was exactly what I wanted.

The initial LED lights I used for test worked far better than anticipated considering they were never designed for “grow lights” . These can easily be changed for any commercial “grow” lights which have many colors/wavelengths. I won’t be changing mine as they are working too well currently. Through the winter of 2014/2015 I have tested multiple grows with no issues whatsoever. In fact- I can’t seem to get rid of the original basil plant I used for testing 🙂

The basil plant is NOT the best form factor. The best results seem to be from trays which you can plant a variety of greens and herbs. Using radish, chives, mustard greens and many more mixed make for a fantastic salad while maintaining a high density of growth in the chamber. 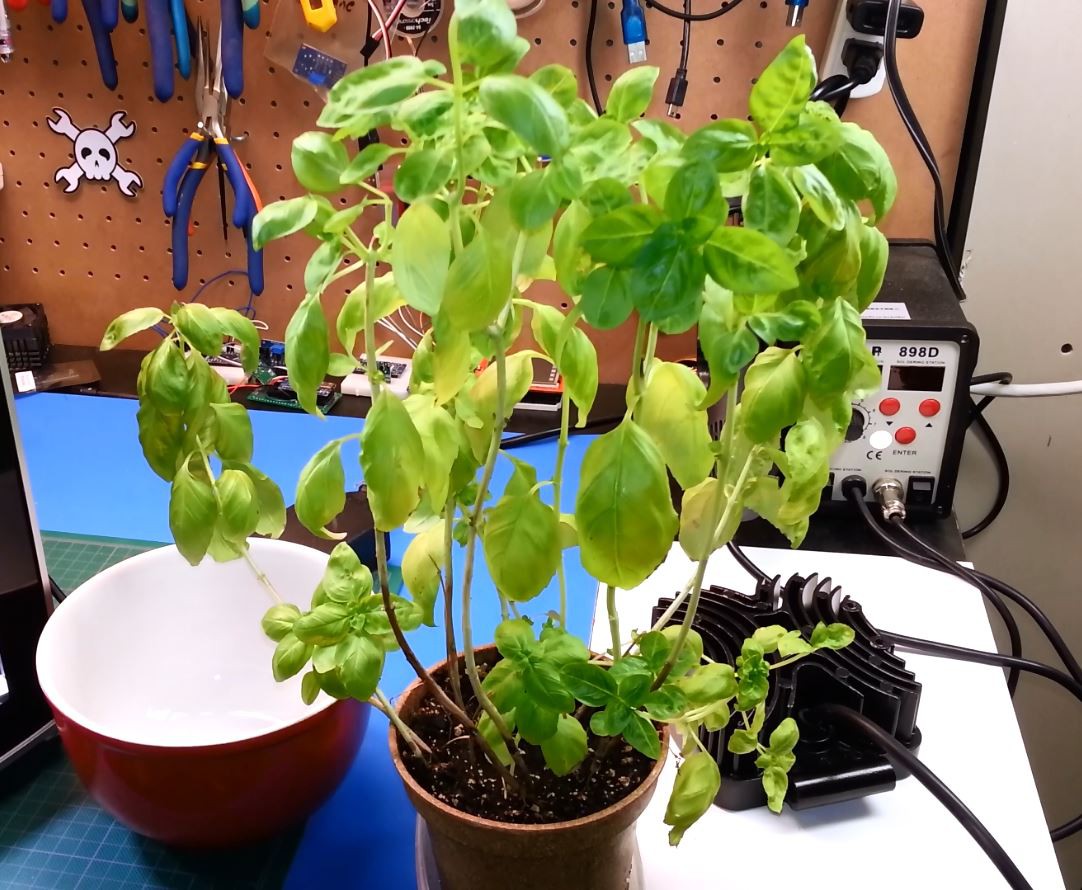 Here is lettuce at 14 days old: 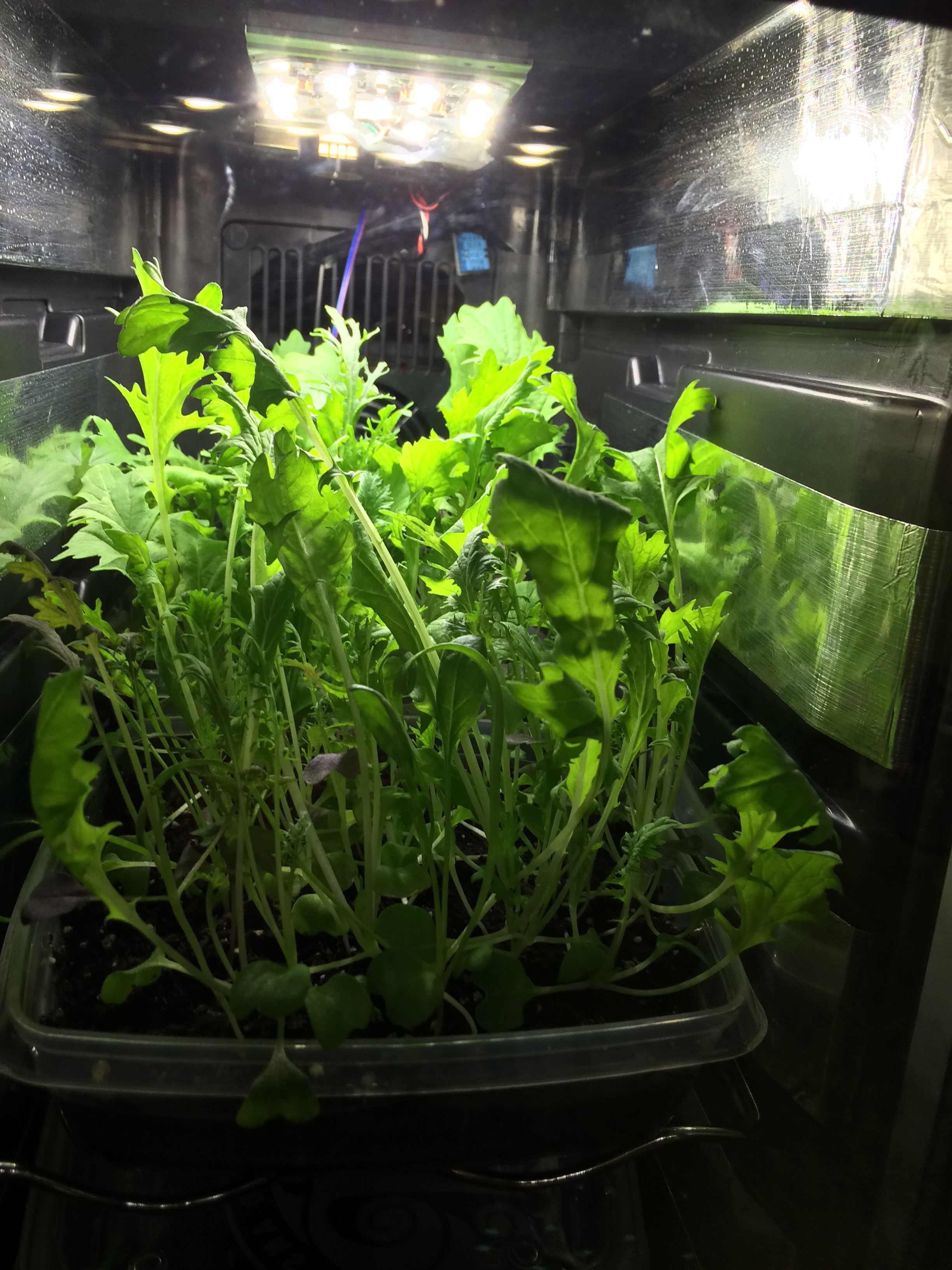 I wanted this setup to appear “at home” in any kitchen. By using the already somewhat “classy” design for wine coolers I believe I was able to hit that target. I really like the look of the unit. Somewhat sleek and unique while still at home in any kitchen. 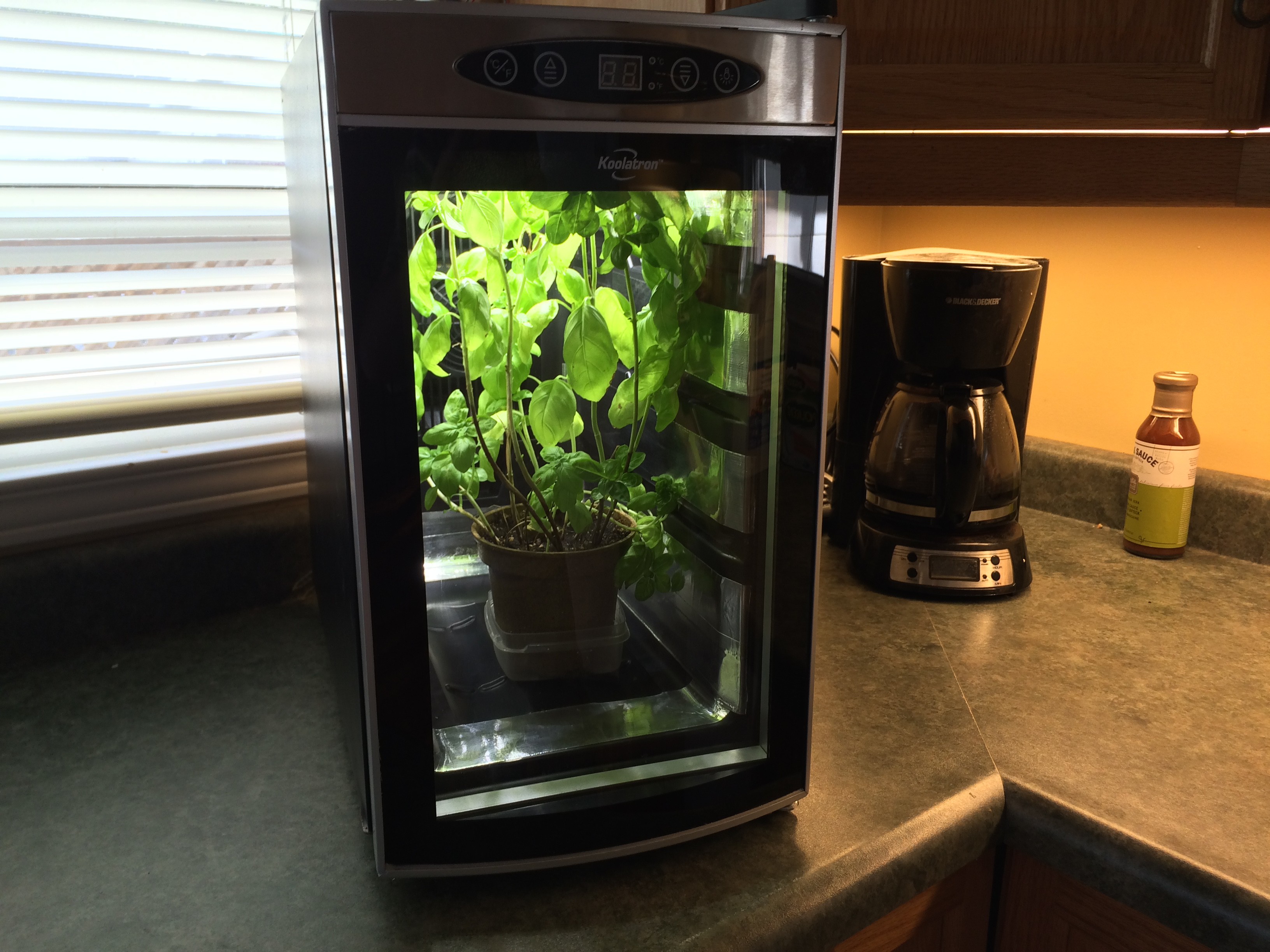 This project is released fully open-source in hopes others will take the design and code to further the self-sustaining food production truly needed for a sustainable future.

Here is the Urban Garden live on the Adafruit Show and Tell show (aired Feb 2015). Fast forward to 8:09 for my appearance since the direct link doesn’t work:

How to plant your Urban Kitchen Garden:

How to grow sprouts and micro-greens in your garden: